I’ve been writing about inflation-protected investments – Treasury Inflation-Protected Securities and U.S. Series I Savings Bonds – since 2011, and I’ve been investing in these products since 1999. So, how these investments have been doing? I track the performance of every maturing 10-year and 5-year TIPS on this page, as they mature in January, April and July.

To view this at a glance, the annual variance number in the last column shows how the inflation breakeven rate compared to actual 5- or 10-year annual inflation. When the numbers are green, a TIPS was the superior investment. When they are red, the nominal Treasury was the better investment.

We just completed a decade-long period of inflation running at less than 2.0%. In general TIPS have out-performed nominal Treasurys when the inflation-breakeven rate dropped below 2.0%, especially for 10-year TIPS. But the next decade could be entirely different. Never predict the future decade based on the performance of the past decade. 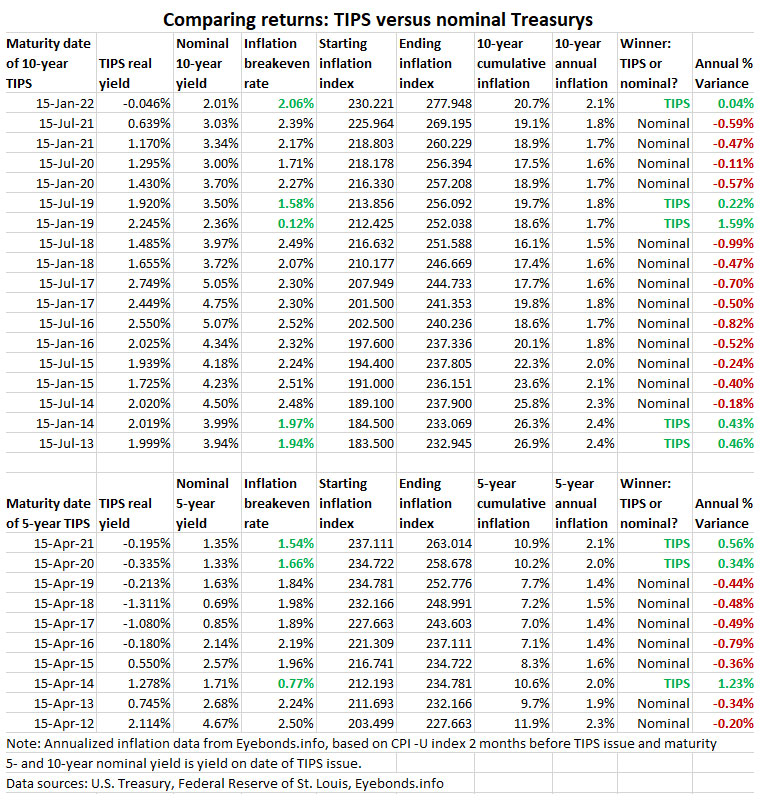 This chart is an estimate of performance, because it uses a full month of inflation in the ending month, when actually TIPS accruals are based on a half month for the first and last months, with the origination and maturity occurring on the 15th of the month.

Keep in mind that interest on a nominal Treasury and the TIPS coupon rate is paid out as current-year income and not reinvested. So in the case of a nominal Treasury, the interest earned could be reinvested elsewhere, which would potentially boost the gain. For certain, we don’t know what the investor could have earned precisely on an investment after re-investments.

In the case of a TIPS, the inflation adjustment compounds over time, and that will give TIPS a slight boost in return that isn’t reflected in the “average inflation” numbers presented in the chart.