Today’s yield of 1.33% is slightly less than the 1.42% this same TIPS generated in a reissue auction on June 20. TIPS and Treasury yields have been sliding lower since the Federal Reserve backed on tapering its bond-buying stimulus program in September.

Reaction to the auction results – announced at 1 p.m. – looks positive, based on the move up in the TIP ETF right after the news: 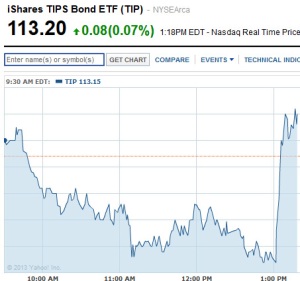 Cynthia Lynn of the Wall Street Journal noted the ‘solid demand’ for this TIPS:

Direct bidders, a group that submits their bids straight to the government, bought 19.1% of the total offering—the most since June 2012. This group of buyers nearly vanished at the last 30-year TIPS sale held in June 2013.

Bloomberg’s Susanne Walker also noted that the auction was well received, even at a time of muted inflation.

“The auction went better than expected,” said Dan Mulholland, head of Treasury trading at BNY Mellon Capital Markets in New York. “There has definitely been a reach for yield and a reach for the long end. There’s a desire for inflation protection with QE in place probably for a little longer than most people expected.”