The Bank for International Settlements (BIS) issued its annual report last week, and it got some attention because it warned of excesses building in the financial system, at the same time Fed Chair Janet Yellen was defending the Fed’s policy of maintaining ultra-low interest rates well into the future.

Its opinion does warrant attention. The BIS — based in Basel, Switzerland — defines its purpose as  serving ‘central banks in their pursuit of monetary and financial stability, to foster international cooperation in those areas and to act as a bank for central banks.’

In its annual report, the BIS notes that ‘markets have been acutely sensitive to monetary policy,’ keeping volatility low and forcing investors to search for higher yields. This results in greater risk-taking, and leading to ‘high valuations on equities, narrow credit spreads, low volatility and abundant corporate bond issuance.’

I’ll excerpt some of the findings from the full report:

Monetary policy is boosting markets. “Highly accommodative monetary policies in the advanced economies played a key role in lifting the valuations of risk assets throughout 2013 and the first half of 2014. Low interest rates and subdued volatility encouraged market participants to take positions in the riskier part of the investment spectrum. ” 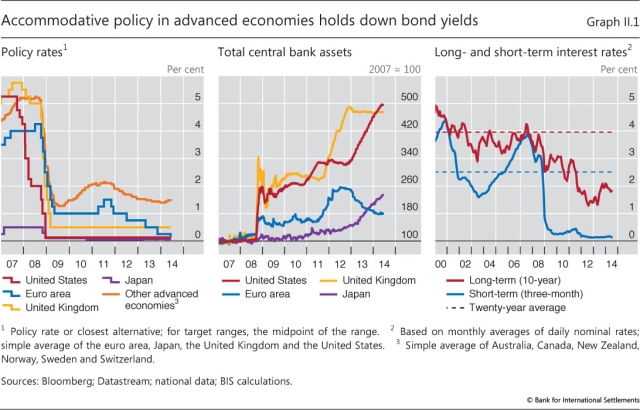 Long-term interest rates increased … “The short end of the US yield curve (up to two-year maturities) remained anchored by current rates and forward guidance. But with new uncertainty about the nature and timing of policy normalisation, long-term bond yields rose by 100 basis points by early July (2013), with a corresponding surge in trading volume and volatility. … ”

“Markets in advanced economies quickly shrugged off the tapering scare, and the search for yield resumed.”

Central banks influenced the markets. “The sensitivity of asset prices to monetary policy stands out as a key theme of the past year. Driven by low policy rates and quantitative easing, long-term yields in major bond markets had fallen to record lows by 2012. Since then, markets have become highly responsive to any signs of an eventual reversal of these exceptional conditions. Concerns about the course of US monetary policy played a central role – as demonstrated by the mid-2013 bond market turbulence and other key events during the period under review. But monetary policy also had an impact on asset prices and on the behaviour of investors more broadly.

“The events of the year illustrated that – by influencing market participants’ perceptions and attitudes towards risk – monetary policy can have a powerful effect on financial conditions, as reflected in risk premia and funding terms. Put another way, the effects of the risk-taking channel of monetary policy were highly visible throughout the period.”

Riskier assets became more appealing.”Fuelled by the low-yield environment and supported by an improving economic outlook, equity prices on the major exchanges enjoyed a spectacular climb throughout 2013. In many equity markets, the expected payoff from dividends alone exceeded the real yields on longer-dated high-quality bonds, encouraging market participants to extend their search for yield beyond fixed income markets. Stocks paying high and stable dividends were seen as particularly attractive and posted large gains.”

Central banks had a ‘powerful impact’. “The developments in the year under review thus indicate that monetary policy had a powerful impact on the entire investment spectrum through its effect on perceived value and risk. Accommodative monetary conditions and low benchmark yields – reinforced by subdued volatility – motivated investors to take on more risk and leverage in their search for yield.”