I’ll be working tomorrow morning – I’m usually off on Thursdays – so I won’t be able to post a morning outlook. I wrote an analysis of this auction last week on SeekingAlpha.com, so check that out for a lot more information, including a historical chart of TIPS auctions of this term.

The Treasury is reopening CUSIP 912828N71 at auction Thursday, creating a 9-year, 8-month Treasury Inflation-Protected Security. This TIPS originally auctioned on January 21 with a coupon rate of 0.625% and a real yield (after inflation) to maturity of 0.725%.

I was a buyer at that original auction, but a lot has changed in the last four months. Here is where CUSIP 912828N71 – which trades on the secondary market – stands on Wednesday evening: 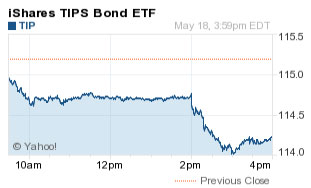 That Treasury page also shows TIPS yields took a ‘big’ jump up today – about 9 basis points. The TIP ETF dropped about 0.86% on the day – its price declines when yields rise – and that happened almost entirely after 2 p.m., when the Federal Reserve released the minutes of its Open Market Committee. Those minutes lead to this Wall Street Journal headline:

Fed to Markets: June Rate Increase Is on the Table

The Fed often releases its minutes on the day before a TIPS auction. Many times in the last five years, those minutes have disrupted the TIPS auction enough to cause much lower yields. It appears this time the Fed could cause TIPS yields to rise, and that will be a good thing for investors in Thursday’s auction.

You can read the Fed minutes here. (It’s an unusually lengthy document.) I think this is a paragraph that jolted the market:

Most participants judged that if incoming data were consistent with economic growth picking up in the second quarter, labor market conditions continuing to strengthen, and inflation making progress toward the Committee’s 2 percent objective, then it likely would be appropriate for the Committee to increase the target range for the federal funds rate in June.

Will the Fed raise short-term interest rates in June? I doubt it. But it just laid the groundwork for future increases in 2016.

I will be posting the result of Thursday’s auction on SeekingAlpha.com.