Janet Yellen speaks, and …. what just happened to TIPS and Treasurys? 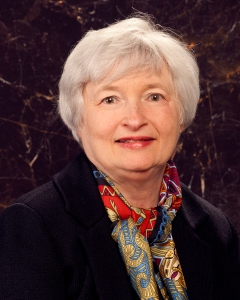 The Treasury market soared across the board Wednesday after the Federal Reserve indicated it would move cautiously in increasing short-term interest rates.

All this came on the eve of reopening auction today of CUSIP 912828H45, a 9-Year 10-Month Treasury Inflation-Protected Security with a coupon rate of 0.250%. And it certainly isn’t good news for anyone planning to bid at today’s auction. (Non-competitive bids must be placed by noon.)

What did the Federal Reserve do? Early news reports yesterday indicated that the Fed lifted its ‘patient’ language and signaled that a rise in short-term interest rates was likely this summer. But just as quickly, the the Fed backed off. From an excellent analysis in today’s Wall Street Journal:

That was a big surprise for investors, who were factoring in a greater probability the Fed would begin to increase rates from near-zero levels in June. The result: Stocks surged, Treasury yields slumped and the dollar tanked against the euro. …

Why the switch? One thing that changed since December is the dollar has gotten even stronger. That happened as central banks around the world have been rowing in the opposite direction of the Fed, unleashing a flood of monetary stimulus. …

Now, inflation is running below the 2% the Fed is aiming for. And the dollar’s rise, which is weighing against the prices of imported goods, makes it even more unlikely the Fed will hit its target anytime soon. …

If Fed Chairwoman Janet Yellen wanted to mitigate the dollar’s rise, she succeeded—for now—even as she injected an aura of patience while removing the word “patient.”

If you want to know more, you can read the Fed’s Open Market Committee statement, which hints at the debate within the Federal Reserve. All economic indicators are pointing toward gradually higher interest rates, but the Fed is fighting against a wave of monetary easing across the globe.

In her news conference, Yellen tried to soften things further, saying that “just because we removed the word ‘patient’ doesn’t mean we’re going to be impatient.”

This language suggests that the Fed is very gently nudging investors toward interest rate increases later this year, and that’s still possible by summer or early fall. It doesn’t seem like the type of language that would cause Treasury yields to plummet or the dollar to drop in value, but that’s exactly what happened. Markets are funny.

But let’s be clear: Higher interest rates are coming.

Checking in on that TIPS auction

This could be a volatile day in the stock, bond and currency markets – the dollar is already up strongly in European markets after yesterday’s plummet. The euro is trading right now at $1.067 per dollar, after soaring over $1.10 yesterday.

Bloomberg’s Current Yields shows the 10-year nominal Treasury trading at 1.94% and the 10-year TIPS that is reopening today at 0.21%. That creates an attractive 10-year inflation breakeven rate of 1.73%, about where it stood last week. TIPS are cheap against nominal Treasurys, but a yield of 0.21% isn’t good enough as we are about enter a period of gradually rising interest rates.

The TIP ETF just opened trading at $113.40, down slightly this morning but up an incredible 1.8% since last Friday’s close. A rising price indicates declining yields. TIPS investors: The trend is working against you.

I’ll be posting the results of the auction after the 1 p.m. closing.

4 Responses to Janet Yellen speaks, and …. what just happened to TIPS and Treasurys?