A troubling report on family net worth from the Federal Reserve

The Wall Street Journal headline today seems like great news: ‘U.S. Household Net Worth Hits Record High.‘ It is good news for those sharing in the prosperity. But the article’s sub-headline sheds light on the complexity: ‘Surging Stock Market and Rising Home Values Deliver Benefits, Especially for Affluent.‘

The Federal Reserve issued a report Thursday noting that the net worth of U.S. households  rose 14% last year, to $80.7 trillion, the highest on record. Even adjusted for inflation, U.S. household net worth – the value of homes, stocks and other assets minus debts and other liabilities – hit a record.

Great news, right? Here’s the dark side, from the Journal report:

But the rebound, while powerful, has been tilted in a way that limits the upside for the broader U.S. economy and is increasingly leaving behind many middle- and lower-income Americans.

“Wealth inequality…has increased over time,” said William Emmons, an economist at the Federal Reserve Bank of St. Louis. “So, there seems to be a disconnect: There are big wealth gains, but not much follow-through on consumer spending.” …

Younger families in particular continue to lag behind in the wealth recovery. The average young family—led by someone under 40—has recovered only about a third of the wealth it lost during the crisis and recession ….  By contrast, the average wealth of middle-aged and older families has recovered to roughly precrisis levels.

I write a blog about Treasury Inflation-Protected Securities and I Bonds, two investments that focus on capital preservation, and therefore are targeted at upper middle-class and wealthy investors. You won’t get rich investing in TIPS and I Bonds, but a lot of rich people invest in them. Why? Because they are already rich.

I won’t admit to being rich (nobody does, right?) but I do know that what wealth I have came because I had the good fortune to be born in 1953, at a time of great economic expansion in the United States. I was able to finish college without debt. I was able to get a good job, right away. My wife and I were able to save money during the greatest bull market in U.S. history.  We were able to buy an affordable house and watch its value climb. We were able to accumulate enough assets to be more conservatively invested during the dual market crashes of the 2000s.

Yes, we saved diligently, but mostly … we were lucky.

Young families – people younger than 40 – face a much different picture today.  Many are burdened with heavy college debt. Many have had trouble finding jobs matching their skills. Their jobs no longer offer pensions, and their pay raises barely match inflation. They pay more for health care. Their investments have been hit by at least one major market crash, maybe two.

These families don’t have large stock market assets – how could they? – and many don’t own homes. So their net worth is not rising along with older Americans’. They can’t join the party.

The Federal Reserve of St. Louis took a look at these numbers and wrote a report titled,  ‘Housing Crash Continues to Overshadow Young Families’ Balance Sheets.‘  It includes this chart showing how younger families are not gaining ground: 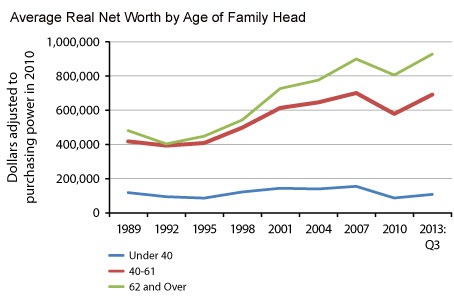 This ‘two Americas’ theme isn’t new, but it is interesting to see it framed as young vs. old. As these young families age, will they be able to accumulate assets to build significant net worth?

I worry about that.